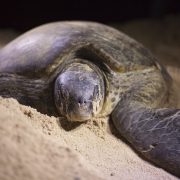 The beaches of the Mexican Caribbean are the stage for one of nature’s most incredible wonders, sea turtles coming ashore to nest on the same beaches that they were born on. All through the summer, huge female turtles will struggle ashore at the dead of night to dig their nests in the sand and lay their eggs. Forty-five to 60 days later, the eggs hatch and the baby turtles will scuttle towards the waves and a new life at sea.

The Mexican Caribbean is one of the world’s most important sea turtle nesting areas and the season begins in May. Turtles emerge from the waves at night to lay their eggs on the Cancun shoreline, the beaches of Puerto Morelos, Riviera Maya, Isla Mujeres, Contoy, Holbox, Cozumel, Sian Ka’an and southern Quintana Roo.

The first turtle nests of the year have already been reported in Puerto Morelos, Akumal and Xcacel and many more will follow them in the months to come.

The Grand Residences security staff are our dedicated turtle guardians and they are getting ready for their busy summer mission. All through the season, they will patrol the beach in front of the resort on the look out for our visitors from the sea. They watch over turtles as they lay their eggs and then carefully move the eggs to a nest in a protected turtle nursery where they monitor them until they hatch.

The guards will release the hatchlings when night has fallen and the seagulls and frigate birds that would prey on these tiny defenseless creatures have gone to roost.

Hopefully in 12 to 15 years time some of this season’s hatchlings will emerge from the waves and begin the long struggle up the beach to nest.

In 2017, the season tally at Grand Residences was 228 nests protected and 20,000 hatchlings released. We hope that our turtle guardians will be even busier this year.

Royal Resorts is a turtle conservation pioneer in Cancun and has been participating in the annual campaign to protect the species since 1985. Official record keeping began at 1998 and since then it has protected 7,995 turtle nests and released 741,042 baby turtles! In 2017, a record-breaking 1,063 nests were protected at The Royal Sands, The Royal Caribbean and The Royal Islander in Cancun and 111,226 baby turtles were set free.

If you are due to visit Grand Residences or Royal Resorts during the summer, join us in protecting these beautiful creatures.

Mexican environmental agency regulations keep human contact with the turtle hatchlings to a minimum and the participation of hotel guests in turtle releases is no longer permitted.

In 2017, 2,356 turtle nests were protected and more than 223,000 baby turtles released in the Puerto Morelos area. Employees from nine hotels, including Grand Residences, support government biologists, marines, students and conservation volunteers in this vital work.

The annual journey of the sea turtle is one of nature’s greatest wonders and Grand Residences and Royal Resorts are proud to do their part to protect this ancient, and sadly, endangered species.

Every picture tells a story