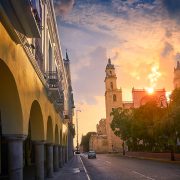 Here’s our regular round up of festivals and events to look forward to in the Mexican Caribbean and the Yucatan in the next few months.

Anniversary of the Founding of Merida, January 6
On January 6, inhabitants of Merida, state capital of Yucatan observe the anniversary of the founding of the city in 1542 by Spanish conquistador Francisco de Montejo. The evening of January 5, a procession of city dwellers and local trova musicians makes its way to the main square to sing the traditional Mañanitas birthday serenade as a tribute to their hometown, followed by a fireworks display. The next morning there is a Mass in the Cathedral and a packed program of concerts, dance performances, art exhibits and more as part of Merida City Fest.

Cozumel Carnival, February 7-13
Dating from 1876, Cozumel Carnival is the oldest Carnival in the Yucatan Peninsula and one of the oldest in Mexico. Cancun, Isla Mujeres, Merida, Campeche and Valladolid will also be holding their own Carnival celebrations in early February.

Elsewhere in the Yucatan, at dawn on the day of the Equinox the rising sun appears through the doorway of the Temple of the Dolls in the ancient city of Dzibilchaltun to the north of Merida.

The spring equinox officially falls on March 20 in 2018 but the largest gathering at Chichen Itza takes place on March 21, a national holiday in Mexico.