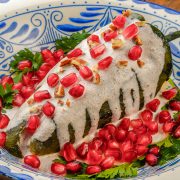 Celebrate Mexican Independence at Grand Residences this month by trying a signature dish always served during the festivities, Chiles en Nogada (Chilies in Walnut Sauce). Chef Yann Cozic and his team will be cooking them up at Flor de Canela, among with many other tempting Mexican dishes.

The time-honored recipe for Chiles en Nogada features poblano chilies with a sweet-savory filling topped with a creamy walnut sauce and sprinkled with pomegranate seeds, coriander and parsley, the colors of the Mexican flag, red, white and green.

A sophisticated dish that is a celebration of Mexican bounty, there is a fascinating story behind Chiles en Nogada. History tells that in 1821, General Agustín de Iturbide visited the city of Puebla after signing the Treaty of Córdoba, the agreement that gave Mexico its Independence from Spain. He decided to celebrate his saint’s day in the city: August 28, the day of St Augustine, and the city’s elders held a banquet in his honor. The nuns of Santa Monica Convent were caught up in the fervor of his visit and invented a special dish to commemorate his visit and the birth of a nation, using the colors of the new flag: red, white and green.

Poblano chilies are stuffed with a sweet and savory filling of ground pork and beef, dried fruit (raisins, citron, peach and apple), spices, garlic and onion and topped with a creamy white sauce made from ground walnuts, almonds and sherry. Pomegranate seeds and chopped cilantro and parsley complete the color sequence.

To this day, the inhabitants of Puebla pride themselves on this patriotic dish and every August chefs compete in a contest to prepare the best Chiles en Nogada.

Recipes for Chiles en Nogada vary from family to family, some cooks put pears and apple in the stuffing or use citron peel, pineapple, prunes or banana. Some swear by nutmeg, pine nuts and add a dash of rum, while others scorn the use of cream or cheese in the sauce, relying on nuts to create the creamy consistency. The staples, however, are pomegranates and walnuts and these are only in season during late August and September, coinciding with Independence month. And whatever the interpretation, the results are always delicious.

Heaven Beach Bar to be even better