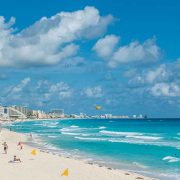 Cancun is in Expedia’s World’s Most Popular Destinations in 2017 list in position number 8. The survey is based on enquiries and reservations received by the online travel agency.

The latest statistics published by the Mexican Tourism Board reveal that the country welcomed 12.5 million international visitors in the first quarter of 2017, 8.9 per cent more than in the same period of 2016. Mexico’s airports also registered a considerable increase in traffic, 22 million passengers from January to April, 11.9 per cent up on 2016. The positive numbers are also reflected in earnings from tourism; tourism revenue in 2016 registered a 54% increase from 2015.

In other news, the island of Cozumel has consolidated its position as a cruise industry world leader. To date in 2017, Mexico has welcomed 6,482,785 cruise ship visitors, 3,607,885 of whom visited Cozumel. This means that the Mexican Caribbean island is currently the world’s most popular port of call for cruise ships.