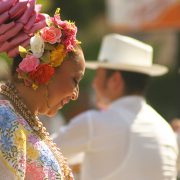 This traditional island festival takes on even more importance this year as Cozumel commemorates the 500th anniversary of the first encounter that Spanish explorers had with the Maya of Quintana Roo in 1517.
Cozumel: 500 Years, the Meeting of Two Cultures will feature crafts from the state’s 11 municipal districts; an exhibition of photos of Mayan community leaders who fought to preserve their customs and land; Mayan music; the traditional vaquería or village festival and a concert by leading Mexican singer Eugenia León.
The celebrations of Cozumel’s 500 years will continue into 2018 when an even bigger event is planned.

Fishermen gather in Puerto Morelos in early May for one of the state’s most important fishing tournaments.

A festival organized to honor a tiny bird? The island of Cozumel is celebrating the beauty of the Cozumel Emerald (Chlorostilbon forficatus), a species found nowhere else in the world. The festival program features conferences, photo exhibitions and cultural events.

For the fifth year running, the Festival de los Oceanos comes to Cancun, Puerto Morelos and Playa del Carmen with a month of events celebrating the beauty of our blue planet. Events will showcase the diversity of marine life in the Mexican Caribbean, the threats the oceans are facing and what we can do to protect the underwater world.
Events will include beach cleaning and other community initiatives such as mural painting and children’s activities, conferences given by leading marine biologists, a culinary festival, art contests, concerts and much more. http://www.festivaldelosoceanos.com.mx

The Sacred Mayan Journey is the reenactment of an ancient pilgrimage. Oarsmen set sail from the port of Pole (now Xcaret) in wooden canoes bound for the island of Cozumel where they will worship at the shrine of Ixchel, the Maya goddess of the moon and fertility.

The island of Cozumel is marking the beginning of the sea turtle nesting season with a festival in honor of its special ocean-going visitor. Two species of turtle, green and loggerhead nest on beaches along the east coast and there are three turtle camps Punta Sur, San Martin and Ixpalbarco from which biologists and volunteers set out to patrol the shoreline during the summer nights.
The festival program will include art workshops for children, photography and seminars on the effect of global warming on turtles, their distribution, turtle health and conservation initiatives. The goal is to increase community participation, celebrate the beauty of turtles and also heighten awareness of the dangers that they face.

Anniversary of the Foundation of Valladolid, May 28

Puerto Morelos has a small naval base and on June 1, Navy Day, the whole town turns out to celebrate el Día de la Marina or Navy Day. Events include a boat procession and a swimming race. This is a great way to meet local people and join the party.

The population of Valladolid turns out on the night of June 3 to witness the representation of a rebellion against injustice in 1910 that was the first spark or chispa of the Mexican Revolution.
More than 800 actors take part in La Chispa. Dressed in authentic turn-of-the-century garb, they play the parts of the rebels, ruling aristocrats, and the police and soldiers sent to arrest them.
After marches through the streets to the main square, the evening culminates with the trial and mock execution by firing squad of the leaders of the rebellion.

Leading chefs from Mexico and other countries are gathering in Merida in June for the Hokol Vuh, a culinary festival that pays tribute to Mayan cuisine and culture.

The chefs will visit fishermen, bee keepers, farmers and renowned Mayan cooks before preparing recipes of their own inspiration celebrating the flavors of the Yucatan.