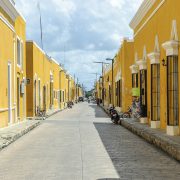 If you like to go somewhere different each time you visit Grand Residences, how about a trip to Izamal, the Yucatan’s very own “city of gold?” Famous for its huge convent and bright yellow buildings, this peaceful little town is often called the “city of three cultures,” a reference to its pre-Hispanic and Spanish heritage and the traditions of today’s Mayan inhabitants.
Izamal is one of Yucatan’s two Pueblo Mágicos, (Magical Towns), a distinction it shares with Valladolid. The Mexico Tourism Board created the Pueblos Mágicos program to promote lesser known Mexican villages and towns that have their own charm and magic due to their handicrafts, cuisine, colorful fiestas, pre-Hispanic or colonial architecture or outstanding natural beauty.

Izamal in the days of the ancient Maya

Izamal has been inhabited since the days of the ancient Maya, in fact the earliest traces of human occupation date back to the third century B.C., making the site older than Uxmal and Chichén Itzá.
Izamal became a sacred site for the Maya, attracting pilgrims from all over the Yucatán, who worshipped Itzamná or Zamna, the chief god, inventor of writing, medicine and agriculture.
Over 20 major Mayan buildings have been found in and around Izamal, along with a network of sacbes or ceremonial roads, house mounds and tombs. The Mayan sun god, Kinich Kakmo was also venerated here and the pyramid erected in his honor still dominates the skyline. Standing 35 meters high, it is the third largest building in Mesoamerica in terms of volume.

The coming of the Spaniards

After the Conquest, Spanish friars took advantage of Izamal’s religious importance by building a huge Franciscan mission on top of the Pap-Hol-Chac temple. The San Antonio de Padua mission was founded in 1549 and completed in 1618. Home to the Virgin of the Immaculate Conception, the patron saint of the Yucatán since 1648, it is one of Mexico’s ten most important shrines. The fortress-like building is also said to have the largest closed atrium in Mexico and one of the largest in the world, with no fewer than 75 arches.
Wherever you turn in Izamal you’ll see cheerful yellow paint and a white trim, this tradition dates from the Colonial Period and started with the convent. Nowadays, most of the historic houses, arches, churches and civic buildings in town sport the Izamal colors.
Explore the streets and squares surrounding the convent on foot or hire a horse-drawn carriage or victoria. Apart from the convent and the Mayan pyramids, other local landmarks include the Town Hall, the Community Museum in Calle 31, the colonial churches of San Ildefonso, Los Remedios, Carmen and Santa Cruz and a number of restored houses that now operate as restaurants and boutique hotels.
Call in at the tourism office in the main square for maps showing the craft workshop trails in different parts of town. Watch local artisans at work as they produce embroidered cotton dresses, hammocks, wood carvings, henequen and seed jewelry and papier mâché butterflies and birds.
Folk art can be purchased in the plaza, at several craft shops and galleries and at the Izamal Cultural Center. Funded by the Banamex Foundation and managed by a cooperative of enterprising young Izamaleños, the Cultural Center also has an exhibition of fine handicrafts from all over the country, an informative display on the history of henequen, a café and a mini spa.
Be sure to have lunch at Kinich Kakmo, the palapa restaurant in the shadow of the pyramid. This popular spot is renowned for its Yucatecan cuisine. Try famous pork dishes such as cochinita pibil and poc chuc served with freshly made warm tortillas and habanero chili salsa or opt for the flavorful chicken and lime broth sopa de lima and a plate of panuchos and salbutes.
As the sun goes down, spend some time people watching in the peaceful main square and stay on after dark for the La Luz de los Mayas Light & Sound Show staged at the Convent at 8:30 p.m., Monday to Saturday.
The landscape around Izamal is dotted with henequen haciendas and the fields of the sage-green plant that played such an important role in the Yucatecan economy in the late 19th century. Most are abandoned but small-scale henequen cultivation still continues at Chichihú. Haciendas Tzalancab and San José Tecoh are open to the public from 6 a.m. to 6 p.m. and offer bird watching trails. Guides are available at the Tourist Information booth in Izamal Town Hall.
If you would like to visit Izamal, ask your concierge to help you arrange a trip. If you decide to rent a car and explore at your own pace, Izamal is 158 miles from Cancún and 43 miles from Mérida, take the turnoffs signposted on the toll road or Highway 180.