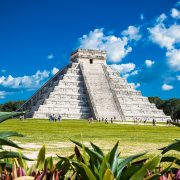 The ancient Mayan capital of Chichen Itza casts its spell whenever you visit it but in March, the month of the spring Equinox, the Pyramid of Kukulcan in the Great Plaza seems all the more impressive and attracts thousands of visitors keen to channel sacred energy.
Also known as El Castillo, the 25-meter-high pyramid is a solar clock, aligned to catch the rays of the setting sun on the spring and fall equinoxes (March 20 and September 22 in 2017). Triangles of light and shadow form along the side of the north staircase and the figure of a snake appears, merging with the head of a stone snake at the foot of the building, creating the illusion of a gigantic serpent slithering down from the heavens and across the ground towards the Sacred Cenote. The apparition of this mysterious figure is testimony to the skill of ancient astronomers and architects.
The snake symbolizes Kukulcan (also known as Quetzalcoatl in central Mexico), the feathered serpent god, returning to earth to give hope to his followers and heralding the spring planting and fall harvest seasons for the Maya.

A pyramid inside a pyramid

The pyramid of Kukulcan was built some time between A.D. 550 and 800, with later modifications between 800 and A.D. 1,000. The majestic pyramid we see today was constructed during the Itzae period when the city reached its peak, between A.D. 1050 and 1300. The Itzae had links with cultures in Central Mexico and this is reflected in their art depicting serpents, eagles, warriors and skulls.
When archaeologists first explored the pyramid, they dug through tons of stone and earth to find a second temple containing a chac mool statue, the enigmatic reclining stone figure with hands cupped to receive the heart of a sacrificial victim, guarding the entrance. There was a magnificent throne in the form of a red jaguar with jade spots and eyes in the inner sanctum. The sacred feline figure was discovered with an offering of coral, sacrificial flint knives and a turquoise mosaic disc.
Studies in the last two years have revealed more secrets hidden deep inside the pyramid. Using the latest tri-dimensional electric resistivity tomography technology, archaeologists have discovered that a cave containing a cenote lies beneath the structure and that there is an even earlier and much smaller temple dating from AD 550 to 800. Built before the Mayan inhabitants came into contact with other Mesoamerican civilizations, it is in pure Maya architectural style. This find means that there are actually three temples on the site built around each other at different times during the city’s history.
The only source of fresh water in the Yucatan, cenotes were the gateway to the Underworld, the home of the gods and were holy places. The earliest pyramid may have been located beside the cenote for religious ceremonies and later rulers added their own monuments on top as a way of channeling sacred power.
A short distance from the Great Plaza is another building associated with Mayan astronomy, the round tower known as El Caracol or the Observatory. It has a viewing platform and wells, which were used by ancient astronomers to mirror starlight, and it was aligned to catch sunsets and moonsets on both equinoxes and to mark the course of Venus.
If you would like to explore Chichen Itza, one of the greatest ancient cities in the Americas, a UNESCO World Heritage Site and one of the Seven New Wonders of the World, ask the Concierge to book a day trip for you.

Set sail for a day of fishing
Scroll to top