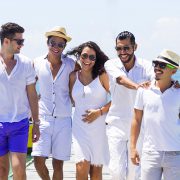 A record-breaking 34.9 million foreign tourists visited Mexico in 2016, 8.9 percent more than in 2015 according to the latest figures published by the Bank of Mexico. Tourism revenue was up 10.3 percent when compared to 2015. The World Tourism Organization also announced that Mexico is set to climb one spot in the World’s Top Ten Visited Countries to No. 8.

With a favorable exchange rate for international visitors, expanding global air connectivity and a wealth of tourist attractions beyond its beautiful beaches, Mexico has great potential for future growth.

In 2017, airlines around the world are adding new routes to Mexican cities, boosting the number of flights on existing routes and switching to larger aircraft to cater to increased demand. Mexico’s airline partners have announced the addition of one million new seats this year on international direct flights from more than 20 countries (source: Mexico Tourism Board).

Mexican destinations continue to figure among the lists of must-see places in international travel magazines. The country is also growing in popularity as a retirement haven, either full-time or seasonal. International Living gives Mexico the top spot in its Annual Global Retirement Index 2017. This survey rates a variety of factors including cost of living, real estate, climate and healthcare.