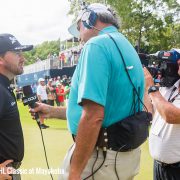 It’s the tenth anniversary of the OHL Golf Classic at Mayakoba in the Riviera Maya November 10-13 and the field of competitors is filling up fast with PGA champions.

As Mexico’s first PGA tournament, the OHL Golf Classic has grown in popularity with the Mexican golf community and three of the country’s top players: Rodolfo Cazaubon, Roberto Diaz and Carlos Ortiz will all be competing for the third time.

With a prize purse of US$7,000,010, the OHL Classic at Mayakoba is Latin America’s most lucrative tournament. With each year that passes, more top players are committing to play the Greg Norman-designed El Camaleon course.

If you would like to watch tournament play contact your Concierge for free admission tickets to the course and to book transport.

Did you know that one of nature’s greatest migrations takes place right here...
Scroll to top