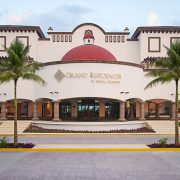 On Monday, September 19, at 12 p.m., a General Ordinary Meeting of the Owners of Grand Residences by Royal Resorts® was held at the Grand Residences resort to discuss and vote on the proposed reconfiguration of Phases 3 & 4 of the resort, in accordance with the call and Agenda sent to each of the Grand Residences Owners by certified mail.
The meeting was called to order and Fernando Lopez Ruiz was elected President of the Meeting; Rossana Mercedes Escalante Cisneros was voted Secretary of the Meeting; and Karen Bayerlein and Luis Enrique Mañueco Medellín were elected Vote Tellers by the majority of representatives who were eligible to vote on behalf of Owners or by Owners themselves who were in attendance. A quorum was declared and the Meeting was declared legally installed.
Present to answer questions on behalf of Desarrollos Riviera Morelos, S.A. de C.V. were Dr. Kemil A. Rizk, CEO of Desarrollos Riviera Morelos, S.A. de C.V.; Fernando Lopez Ruiz, Vice President of Finance & Administration – Chief Financial Officer; and Dr. Simon Crawford Welch, Chief Sales & Marketing Officer.
Dr. Kemil A. Rizk gave a presentation outlining the proposed reconfiguration of Phases 3 & 4 and discussed the following topics:

During the presentation by Dr. Kemil A. Rizk and Fernando Lopez Ruiz, the attendants posed multiple questions and offered their comments both against and in favor of the proposal. A vote was then called. All votes were counted and verified by the Vote Tellers.
The result of the voting was “In favor of the proposed reconfiguration”: 75.07%; and “Against the proposed reconfiguration”: 7.78%. The balance of 17.15% represents the votes that were not present, represented, received or arrived by other means than Certified or Registered mail and were ineligible to be counted.
Given that the proposed reconfiguration was carried and approved with 75.07% of valid votes voting in favor, Desarrollos Riviera Morelos, S.A. de C.V. management will now move forward with securing the necessary financing and other arrangements to allow construction and completion of the resort.